Two of the main components I used were the TTL JPEG Camera and the SM-S3317SR Servo. 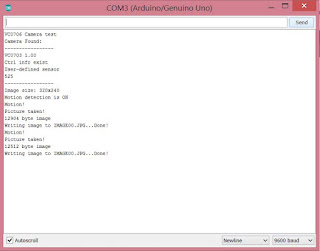 The camera requires its own library, and has a couple demos along with it. The one I worked on editing for my own purposes was the motion detection example. The screenshot is from my serial monitor; the camera takes a picture each time it detects movement. It saved it twice as IMG000 because I didn't have an SD card for it to save it to.

The two things I needed to change were it taking a picture, and it stopping motion detection briefly once it detected motion.

The other component was the 360 servo. Rather than being able to tell it to go to a particular angle, you tell it what speed you'd like it to rotate, and which direction. The center for this servo is 92; anything below 92 will make it rotate counterclockwise, and anything above, clockwise. The further the number is from 92, the faster it will spin.
Posted by Unknown at 8:52 PM