So For Mini project 2 I'm going to continue on my trend of wearable art.

Here are some of the links that I've been looking at for research.


Also, I never was able to leave that failed project 1 behind. Since I couldn't get it to work with the conductive thread, I went back and re-wired and soldered it. 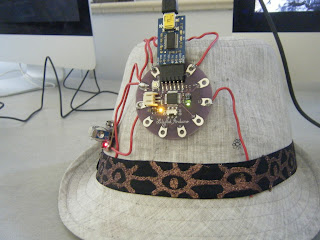 Re-tried the blink example that I couldn't get to work the first time around. It works!


Then I figured that I should try the code for the photoresistor again. So I did. It involved a lot of googling.

Here's the code I used


int led = 11; // pin the leds are connected to
int sensorPin = A3; // sensor is connected to analog pin 3
int sensorpwr = A5;
int base;
int sensorValue; // variable to store value coming from the sensor
int threshold = 30;
int brightness = 255;
int shine = 0; // how brightly it shines
// the setup function runs once when you press reset or power the board
void setup() {
// initialize digital pin 13 as an output.
pinMode(led, OUTPUT);
pinMode(sensorpwr, OUTPUT);
pinMode(sensorPin, INPUT);
digitalWrite(led, LOW); // turn led on
digitalWrite(sensorpwr, HIGH);
base = analogRead(sensorPin);
}

So I decided to concede defeat on that front of awesomeness.

Instead of light. I figured I would investigate motion in this next mini project. Specifically, the accelerometer. I want o bring the party with me.